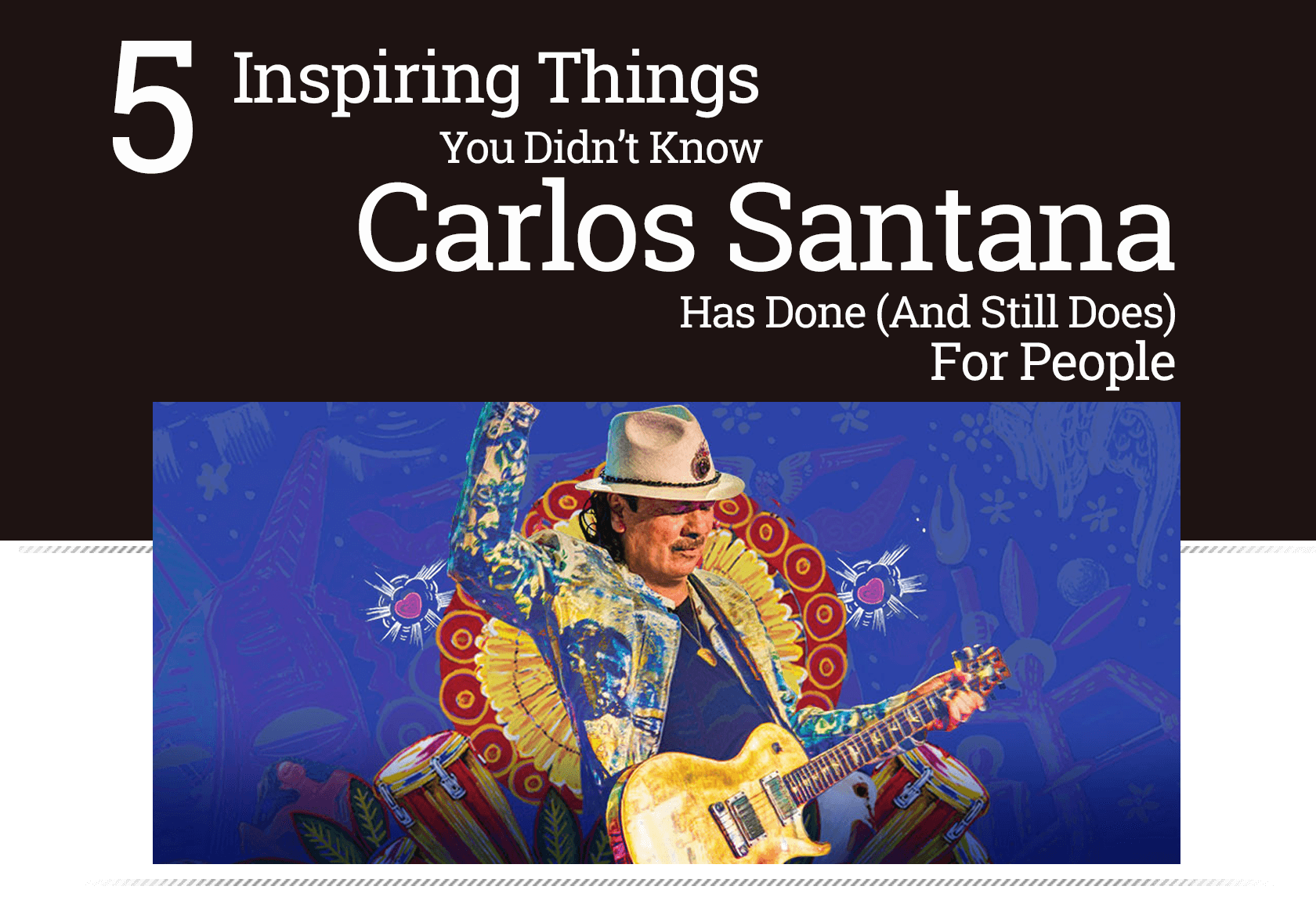 Carlos Santana’s legacy spans decades of musical greatness, spiritual richness, and human transcendence as his legacy isn't limited only to music. His influence expands to several humanitarian labors in which the musician has been active uninterruptedly.

Ever since his first epic debut at 1969’s Woodstock festival, the artist became a profound inspiration to the lives of millions of people around the world. At first because of his infectious rhythms and guitar riffs by his musical heritage, but throughout the years he has gone beyond that with his honorable acts of kindness that strengthen his message of love, hope, and unity.

Today we’ll review 5 of his most inspiring labors, and the impact they have to this very day you're reading this. You might be surprised that the only thing greater than his musical talent is his selflessness and the way he wants to keep on giving more to those who have less.

‘Milagro’ is the Spanish word for Miracle, which is really fitting for this foundation’s cause and achievements.

Carlos and his family founded Milagro in 1998, having in mind the countless communities with children that have neither access to proper healthcare nor education.

In an effort to help change this situation, the foundation has already collected and invested $7.5 million dollars in collaboration with 392 organizations to aid 36 states around 18 countries.

Carlos is proud of where he comes from and says that this is what gives meaning to his success. "I know what it's like to - to live in a neighborhood with no running water, no electricity, no toilet," he says. "When I go to Hong Kong, Tijuana or India whatever - whatever it is, it smells the same. People who identified with me from - from those places who are - not so well-to-do on this planet, they claim - you know I represent them to a certain extent. That is my reward: to be connected with just people."

This is a serious worldwide issue that keeps increasing with every passing year, but the help of prominent artists like him, capable of collecting resources and fighting tirelessly for a cause, is a modern day miracle.

Learning about the true background for his inspiration gives a humbling sense to his art and the way it’s perceived. The miracle is that when united, we can overcome barriers and do what seems impossible for many.

On 2003, Carlos and The Santanas joined one of the toughest battles humanity has had for decades. As you probably already know, Africa struggles tremendously in terms of health and education, with AIDS being a large part of its suffering, having nearly 5 million of people infected with the virus.

Carlos called for people around the world to help create a “spiritual virus” of passion and commitment in this global fight, claiming “This is a tremendous gesture of love from us to all of you”.

The goal was to collect between $2.5 million and $3 million dollars taken from his 23-city ‘Shaman Tour’ for the cause, which was successfully achieved.

The program supported anti-HIV medications and orphaned children with HIV education and prevention, and destigmatization.

As a musician, Santana finds in music a “higher power” by which one can channel emotions, ideas, and spirituality.

Naturally, he supports others in expressing themselves through it as well.

Being aware, like he always has, of the lack and necessity of resources, he looked for a way to support this cause.

In 2002, he joined David Wish’s Little Kids Rock foundation, being part of its initial support, with the intention of providing innovative and inclusive music education to kids that lack the resources to afford classes or instruments.

The foundation is still running and operating across 45 states, reaching out to more than 850,000 students since Little Kids Rock started.

Carlos, more than anyone, knows music is a universal language, and just like other forms of expression, it’s an opportunity that should be available for anyone, anywhere. Because of this, it’s a blessing to know that artists like Carlos not only understand the importance of making music accessible but also support it unconditionally as much as they can.

After all, kids do rock, right?

Even when Santana’s message has already spread worldwide through his music and altruism, he looked for the perfect way to enhance his message, establishing a platform where everyone could share and improve positiveness, unity, and spirituality.

Passionate for the idea, Carlos, along with a group of creatives of his trust, created Architects of a New Dawn, a free and public platform with the goal of inspiring, uplifting, engaging, and transforming the global community through music and positive media.

That way peace will spread out further.

Ever since, the platform has been running its own website and Facebook pages, serving the community to get inspired and to inspire others.

This humbling, yet significant achievement is one of the most symbolic ones Santana has accomplished. It shows his real passion for impulsing self-development through spirituality and to connect people through positivity.

Throughout the years, it’s been a widespread practice for artists to give away instruments, tickets for their concerts, and memorabilia to fans.

How about major giveaways?

Santana is also well known for being good at teamwork when it comes to music and charity as well, as he has participated on 20 registered charities worldwide and his Milagro foundation has served as a bridge to connect with other causes.

In 2011, Milagro, in collaboration with Hermes Music, donated around 100 instruments, being most of them acoustic guitars to his hometown Autlan de Navarro, México, to promote music and culture, showing that he remains true to himself and his roots. This is one among several donations ever since The Santanas founded their charity group.

Today, Carlos keeps his humanitarian work as active as his musical act, and his overflowing energy keeps expanding as it touches people's lives.

These are some of the main reasons why Carlos is so loved around the world, as his message flows through his music, and materializes in his actions.

His legacy brings us all peace and unity, true inspiration, and a true love for life.

These days, the best place to get a taste of this world-changing inspiration is through ShopSantana, where we are certain, the more you keep Santana at home, the more peaceful and humble you will live with yourself and those around you.

What this store does essentially is support his work and spread his message by distributing his art for display on canvas, and surround personal spaces, just like yours, with this essence.

We strongly believe that when united, we can keep love alive worldwide and with these canvas pieces serving as a bridge to get resources to the Milagro foundation, where a percentage of every purchase is directly donated.